The MSO Project: Changing to a Team-Oriented Process 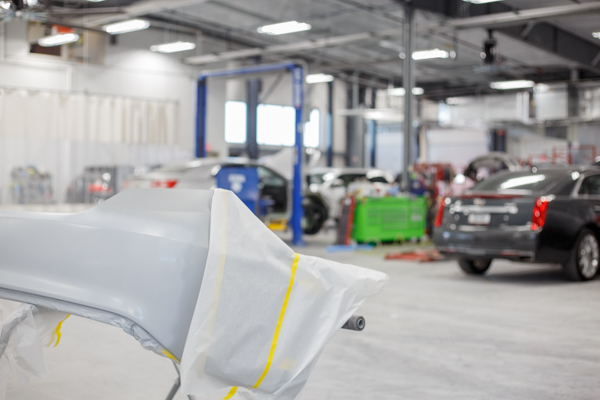 Doug Keller was used to working as a technician on a flat rate basis so, when he opened his own shop in 1979, he decided to stick with what he knew. But when Keller, owner of six locations of Eustis Body Shop in Nebraska, ran into trouble finding staff for his shop in those early years, he realized that pay could be the issue.

He hired his cousin, who also went to school for collision repair, but experienced a few rough years of high employee turnover. Keller learned that working in a small, rural town presented its obstacles to finding people who were truly interested in learning more about the industry.

Over the years, the shop evolved into a team of technicians, he says, and that developed into a team-oriented pay plan.

The shop began as a 50 percent commision paid on labor and then that was reduced in subsequent years to 45 percent paid on labor. Finally, the shop introduced a flat-rate commision pay plan based on years of service and experience level.

“If you only have individual players, there is a ceiling you will hit [for KPIs] and, unless you create a team situation and change the shop culture itself, you’re never going to improve,” Keller says.

Now, the business is celebrating its 40th year anniversary and produces $10 million in annual revenue because the team pay plans resulted in better KPIs, and other metrics. For instance, the team was able to work faster and cohesively to increase touch time from 2.5 hours to 5 hours each day.

Keller ventured into a team pay plan because his shop wasn’t improving. They were stuck. With a corporation of 65 employees, he realized that sometimes a commision-based plan is “more self-serving.”

While not all the shops had issues, some shops experienced a type of “unrest” among staff. Employees were finger pointing, arguing about hours on the estimate and it was a generally poor work environment.

Keller soon realized his commision-based shop was creating a culture of greedy people.

If an employee found issues with dirt in the paint before the customer received his or her vehicle, Keller had a hard time convincing his painter to help solve the problem because it would take away from overall work hours. The detailer stopped helping with anything but washing cars and the painter had no motivation to help with a vehicle part that came back bent or otherwise damaged.

Roughly five years ago, Keller noticed his body shop team more motivated by how many hours they worked versus caring about the end result of the repair. He decided it was time to redo some processes to fix the shop’s negative culture.

Keller started the process by sitting down with his managers, who he then had call meetings with the shop employees. At the beginning of implementing a team pay plan, he held meetings two to three times per month and when the process was more fleshed out, the meetings slowed to once per quarter.

He created a spreadsheet for the work that the technicians would be doing as a team and presented it to everyone at the meetings. The spreadsheet included the categories of an individual’s efficiency, billable hours in the pay period and the hours the technician worked.

Now, each shop has a different pay structure depending on the type of town it is located within, Keller says. In Lincoln, Neb., five technicians work on a full hourly based, gross profit bonus team. At the Kearney, Neb., and Grand Island, Neb., locations, six techs and five techs, respectively, work on a modified flat-rate team with other incentive-based bonuses. The other three shops are smaller and only have one body technician and one painter each so they work well without the team pay plan, he says. Those three teams at shops in Eustis, Cozad and Lexington also receive incentive-based bonuses.

At the start, Keller took time to explain that moving from a commision-based pay to a team pay plan would result in better KPIs, like cycle time. After switching to incentive-based bonuses and a team pay structure, touch time for the shop increased from 2.5 hours to 5 hours per day.

The newest shop location in Lincoln, Neb., pays staff hourly but also includes a team bonus to ease the staff into the rest of the shop’s structure.

Despite an initial increase in touch time, Keller did lose some employees in the transition.

“It was the best thing that could have happened to us, to be honest,” Keller says.  “Those employees had been generally negative, self-serving and not interested in how the shop was performing.”

So, Keller started looking for people who asked a certain type of question in the interview process. He discovered that people who asked about salary amount or what the commission is for doing a special job tended to be hires that also had a negative attitude. Instead, he started paying close attention to people who asked what type of company they were entering.

“It’s a way friendlier atmosphere now,” Keller says. “The discussions are focused on how we are going to get a car through a shop versus how many hours can a person make on one job.”

(This article originally appeared in The MSO Project Magazine)